"DRO" Named Citizen of the Year 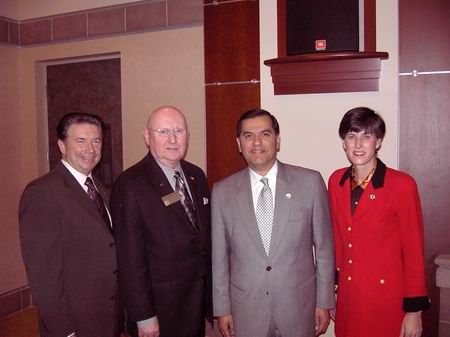 David Russell Ohrn (second from left), co-owner of South County Printing, was honored by the Laguna Hills and Laguna Woods Chambers of Commerce on Friday, March 4, 2005 at the Laguna Hill Community Center.

"DRO" as he is known to most people in South Orange County California was selected as the "2005 CITIZEN OF THE YEAR".

The presentation was made jointly by Chamber President Kay Kearney, of Doctor's Ambulance (photo not avaialable) and Tom Wilson (Far Left), County Supervisor of the 5th District, of Orange County California.

Members of the Chamber and many City Officials were also in attendance at the annual event. "DRO" is the 13th Citizen of the year named by the Chamber.

"DRO" has been active in various community functions in South Orange County for the past 30 years.